I am absolutely blissed out to be part of the upcoming Inland (18.3) concert this coming Sunday, March 11. The event, titled There Are Many Shades Of Blue, And It Is Difficult To Say Which They Are, will feature a new solo work from me alongside a new work by Francis Plagne and two works by historic composers that i greatly admire – Criss-Cross (2013) by Alvin Lucier and Motore Immobile (1979) by Giusto Pio. The latter works will be performed by incredible musicians and dear friends Oren Ambarchi, Alex Garsden, Francis Plagne, Lizzy Welsh and Rohan Drape.  Best of all, it’s a later afternoon show! i don’t think this could be any better. Full details here. 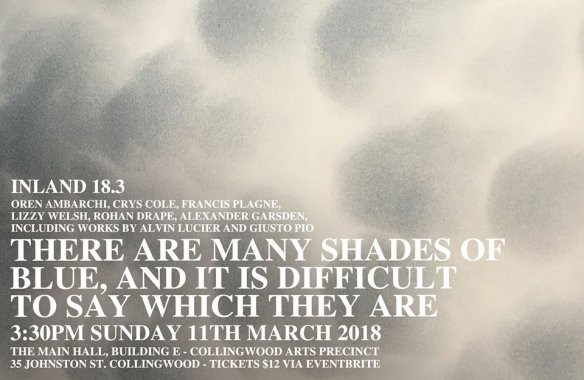